The soy checkoff invests every North Dakota soybean farmer’s investment to increase soy use by customers beyond the elevator, including international users. U.S. soy exports have grown steadily for the past 20 years. This growth (forecast by exporters and importers of U.S. soy to continue) can be attributed in part to soy-checkoff-funded efforts to build international sales of U.S. soy. As part of these U.S. farmer-funded activities, the North Dakota Soybean Council (NDSC) works to cultivate new markets or growth in existing ones.

In the 2014-2015 marketing year, North Dakota soybean exports were valued at $1.8 billion, based on an average market price received of $9.49 per bushel.  During 2014 in North Dakota, 202.5 million bushels of soybeans were produced.  The vast majority of soybeans grown in North Dakota are shipped by rail to the Pacific Northwest and are destined for southeast Asia, which is why international marketing continues to be a priority for the board. NDSC continues to annually fund projects, host international trade teams and build relationships with other countries to learn more about international market demands and soy needs overseas. 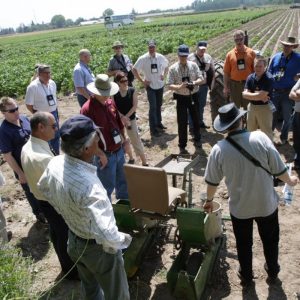 This project (funded by the North Dakota, South Dakota and Minnesota state soybean boards) is designed to educate buyers in the soybean market to recognize critical amino-acid values rather than crude protein as the true indicator of the soybean feeding value. The goal is to no longer discount northern-grown soybeans due to the lower crude protein.  To learn more about EAA, click here.

The American Soybean Association’s World Initiative for Soy in Human Health (WISHH) is the North Dakota soybean growers’ trailblazer for trade in long-term markets. NDSC Board Member Art Wosick is a national leader, serving on the WISHH Program Committee along with U.S. soybean farmers from 10 other states.

NDSC has supported WISHH’s efforts in countries like Bangladesh. Located on the Asian Sub Continent, Bangladesh is home to more than 168 million people and a rapidly growing middle-class economy. Bangladesh’s demand for U.S. soy has grown to more than a 25 million bushel equivalent market. Similarly in Pakistan, WISHH built an extensive commercial network for the U.S. soy value chain as it leveraged soybean farmer resources with U.S. Department of Agriculture funding of programs like the FEEDing Pakistan aquaculture project.

WISHH and NDSC are expanding human consumption of soy-based foods in Myanmar, Cambodia and other developing Asian markets by teaming with local industry to improve soy processing and increase awareness of soy and soy-based foods. NDSC Board Member Matt Danuser witnessed Myanmar’s increasing demand for soy protein when he joined a WISHH trade mission and participated in WISHH’s U.S. Department of Agriculture (USDA)-sponsored seminars with Myanmar’s food manufacturers, edible oil processors and others.

Working jointly as the U.S. Soybean Export Council, the following stakeholders open markets and grow demand for soy products around the world:

Northern Crops Institute (NCI) is a collaborative effort among North Dakota, Minnesota, Montana and South Dakota to promote and develop new markets for crops. The NCI is an international meeting and learning center that brings together crop buyers, commodity traders, technical experts, processors and farmers from all points of the globe for discussion, education and technical services.

The NCI is housed on the campus of North Dakota State University in Fargo, only minutes from the fields that produce the crops the institute promotes. NCI short courses enable participants from around the world and across the U.S. to learn about northern-grown crops and their unique quality, marketing and processing characteristics.

The Commodity Trading Room is a high-technology room with live information feeds for financial information including equities and credit, plus commodity market information such as agriculture, energy and biofuels.  The ND Soybean Council is a proud supporter of this project.

The Specialty Soya and Grains Alliance (SSGA) is the premier business alliance of U.S. companies focused on production, processing, and shipping of specialty soya and grains worldwide. Its mission is to provide resources that communicate the quality, diversity, and availability of identity-preserved soya and specialty grain products.